Transparency International, the global civic coalition against corruption, in 1995 as a complex indicator for evaluation of corruption in the public sector in the different countries worldwide. 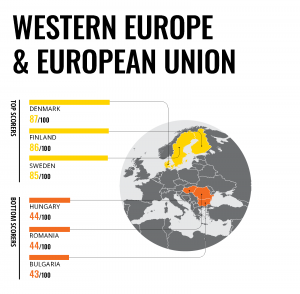 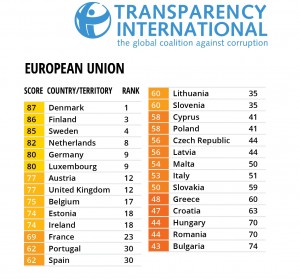 Transparency International, the global civic coalition against corruption, in 1995 as a complex indicator for evaluation of corruption in the public sector in the different countries worldwide.

It is based on information obtained from research of respectable international institutions and organizations. The index established at Transparency International measures the level of political and administrative corruption in a given country in the same way it is understood by the representatives of business, analysts from the world as a whole who assess the political and economic risk, including consulted experts from the states under research.

Its value ranges from 100 –indicator for a low level of corruption, to 0 –indicator for a high level of corruption. The information of the Index is submitted to TI free of charge, while within the frames if the current year research a new source has been included -Varieties of Democracy. The institutions providing information for CPI are: The World Bank, Economist Intelligence Unit, Freedom House, World Economic Forum, Institute for Management Development –Center for Global Competitiveness, Consultancy Group for Political and Economic Risk Survey, Bertelsmann Foundation, Bank of Development of Africa, Global Insight –Center for Global markets Research, Group for Political Risk Evaluation, Global Legislation project and V-Dem Institute of the University of Göteborg(whose study “Varieties of Democracy” evaluates basic principles and institutions the democratic process in the states is grounded upon).

The Corruption Perceptions Index of Bulgaria in 2019 is 43 points and place Bulgaria 74th in the world ranking. In the regional ranking of the Member States of the European Union, Bulgaria still ranks last (the average index score is 64.32).

Bulgaria is included for the twenty-second time in the Transparency International survey. Compared to 2018, the index marks a slight increase of 1 point.

The increase of one point in the result of the Index is not statistically significant and two circumstances should be taken into account: index values ​​below 50 are indicative of a systematic problem of corruption and of ineffective fighting of corruption and the country should make significant progress and its results will increase of more than 3 points.  The result in 2019 does not allow the country to move forward from its last place in the European Union ranking.

Analyzing the results of the Index for Bulgaria in the period between 2012 -2019, the outcomes show that there is no significant progress in fighting corruption in comparison with positive developments in other countries from the EU. As an example, we could show countries like Greece, Estonia and Czech Republic. The country’s Index shows a tendency of lengthy delays. In details the results shows:

Тhe long-term average of the Index for the EU Member States is 64.32 points for 2019 and including the counties like Norway, Switzerland and Iceland in the ranking the total regional rating of the EU is 66 points.

The comparison between Bulgaria and the other EU counties shows not only the lack of development for a relatively long period but shows a tendency of lengthy delays.

To read more details about the Corruption Perceptions Index for Bulgaria, please visit the Bulgarian section of the site.

Here are the results from the index, as well as some additional assets provided by Transparency International.

The Corruption Perception Index for Bulgaria is 42 which ranks the country on 78 place in the world ranking  Research...

Corruption perception index for 2020The Corruption Perception Index for Bulgaria is 44 points which ranks the country on 69 places...

Corruption perception index for 2019Transparency International, the global civic coalition against corruption, in 1995 as a complex indicator for evaluation...